A South African’s guide to moving to and making it in Malta: A cottage for sale

Nearly a year ago, a study was published which listed Malta as the second most attractive location in the EU for buy-to-let yields. This month, my Maltese falcon namesakes come home to roost as a new report shows that Malta has edged out Hong Kong as the territory or country with the highest residential price gains in the 12 months to June. Is it any wonder then that with such rampant development on the island, Malta's national bird should be... the crane?

The buy-to-let yields and the residential price gains are effectively flip sides of the same coin (and how apt that the coinage figure of speech speaks to monetary gain). It is the currency of property owners and landlords.

According to a buy-to-let table published in October 2017 by international payments firm WorldFirst, Malta was the second most attractive location for such investment, surpassed only by Ireland, also registering above average national economic growth.

The table, which compares the cost of real estate and rental income yield, shows that last year an investor would have made a 6.64% return in Malta.

On the other end of the scale, the worst place to have invested in a buy-to-rent property was Sweden, where the average rental yield was 3.03%. (In Sweden, rents are controlled by the government and a landlord cannot raise rents arbitrarily.)

Malta’s boost in the buy-to-let rankings arrived on top of a booming rental market driven by a high demand from well-paid foreigners working particularly in the i-gaming and financial services sectors.

It will be interesting to see when the 2018 survey is published In October whether Malta has ascended to the top spot.

Meanwhile, according to this month’s Knight Frank LLP Global House Price Index published on Friday, the island’s real estate has the highest ‘price gains’ in the world.

Based on figures taken from Malta's own Central Bank, home prices on the island rose some – wait for it – 16,9% in the 12 months to June when compared to the same period in 2017. "Supply constraints, combined with a robust economy (6.6% GDP growth in 2017) and a buoyant technology industry is pushing up demand," the report said. 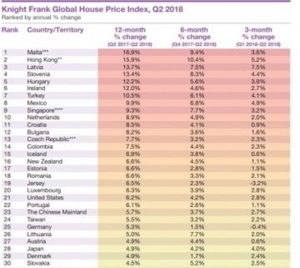 Hong Kong, historically the world’s priciest housing market, came in second, with price increases of 15,9%. It has led the index’s rankings on 10 occasions since 2009.

Back in July, the EU's House Price Index had suggested that property prices on the island were actually dropping, though the Developers Association quickly shot down those findings.

Malta Developers Association president Sandro Chetcuti has maintained that the facts show that there has actually been an increase in property prices across the board. Local analyses have shown property prices were increasing at the rate of about 4-5% when compared to the same period the previous year "at a minimum", Chetcuti said.

The Central Bank of Malta’s quarterly review published in May had found that the Property Price Index computed by the National Statistics Office showed that prices increased at the more moderate rate of 4.1% during the last quarter of 2017, after rising by 4.8% in the third quarter.

Although fantastic news for landlords and property owners, surging rents have created a great deal of downstream disturbance in the lower socio-economic demographic.

The influx of foreigners to Malta has seen the rental market rise across the island, with average monthly rents doubling, and in some areas even tripling over recent years.

Although this has resulted in a bonanza for landlords, it is having negative repercussions, particularly on locals, who are finding it increasingly difficult to keep up with the higher rates.

Other tenants risk being driven out of the market, with landlords preferring to rent their properties to foreigners and charging higher rates creating increased pressure on social services.

NGOs have been calling on the government to intervene in the uncontrolled rent spiral. Developers and real estate agents dismiss the calls, insisting that the government should subsidise rents instead.

The rental boom has given birth to a new and particularly Maltese phenomenon: build-to-let. Whereas the phrase ‘buy-to-let’ puts the purchaser in the frame, ‘build-to-let’ prioritises the developer. In terms of the secret language of words, build-to-let tells you that the axis of power on the island has shifted. The buyer no longer has the power, instead it has been captured by the property developers who have come to control Malta’s economic agenda and thus its future legacy.

The rich get richer and the poor get poorer – it was ever so.